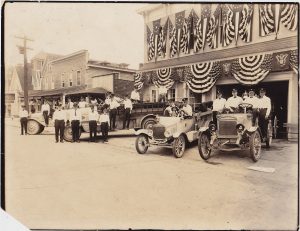 The history of the Pitman Fire Company Number One began on June 12, 1901. A meeting of residents held that evening at the Knight of the Golden Eagle Hall, for the purpose of considering the organization of a fire company. Following that meeting, the members procured their fire fighting equipment. The equipment consisted of a twelve (12) foot and sixteen (16) foot extension ladder, three (3) axes, a fire hook, and two dozen galvanized buckets.

Two (2) months later, at the August meeting, the membership voted to store their equipment at Carr’s Livery Stable. That site would later become Trio Motors and Getz Furniture. A locomotive rim to sound fire alarm was donated by the Pennsylvania Railroad on February 24th, 1902. Articles of Incorporation were signed on March 28th, 1802 and the Company’s first piece of wheeled equipment, a hose cart, was delivered on July 28th, 1902.

On August 25th, 1902, the Members of the Company were notified that the Camp Meeting Association donated a plot of land to be used for a fire house. The plot was located on the corner of Pitman Avenue and Simpson Avenue. Building materials for a brick and stone fire house were furnished by G.W. Carr for the cost of seven hundred (700) dollars on January 26, 1903. Construction Commenced and the Gala Jamboree celebrating the new fire house was held on October 23rd, 1903. The building’s original bell was replaced on July 7th, 1904, because the residents could not hear it. In 1906, due to continued difficulties in hearing the alarms, a sixty foot bell tower was erected and another bell was placed in it. After a few years, a horse drawn hook and ladder, chemical, and hose cart were purchased.

In 1915 the company received its first piece of motorized apparatus. It was a Brockway Chemical Engine purchased for $1,280.00. It is interesting to 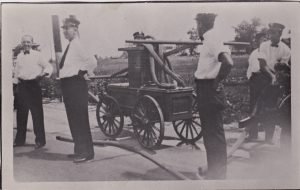 note that at this time in the Company’s history that this new apparatus was only one (1) of sixteen (16) in the entire county, meaning that the Company was of the first to acquire said apparatus in Gloucester County. The Company’s first piece of pumping apparatus was a 750 Gallon Per Minute Seagrave Pumper, purchased on November 3rd, 1921.

As the size of fire apparatus increased, the Company soon outgrew it’s original fire house. In 1922, the Company moved into it’s Borough Hall Headquarters, located at the corner of Broadway and West Holly Avenue at that time. As it did not take time to outgrow the original fire house there, a new building was constructed next door in 1936.
Upon completion of the new fire house, the Brockway Chemical Engine was replaced with another 750 Gallon Per Minute Seagrave Pumper. The Horse Drawn Hook and Ladder was also replaced with an American LaFrance Type 17 City Service Hook and Ladder. This would mark the first instance where the Company had a complete fleet of motorized apparatus. 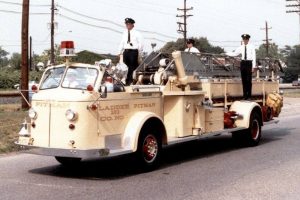 After twenty (20) years of service, the City Service Hook and Ladder began to show its age, so in 1955 a new ladder was ordered. On July 4th, 1956, the new ladder, an American LaFrance 700 Series 75 foot Ladder Truck was placed into service.

Although the exact year is currently not known, Pitman Fire Company Number One has been providing rescue services for Pitman and the surrounding communities since the 1940’s. It’s original Rescue Apparatus was a utility van that was eventually replaced with a Chevrolet powered Rescue Truck with a Walk In style body manufactured by Kutz. Hurst Extrication Equipment was added to the Rescue in the late 1970’s and the Rescue was in service until 1997, when it was replaced with a Smeal/Spartan Rescue Pumper.

After many years in the station next to Borough Hall, the building was condemned in 1979, forcing the Membership to move the fire house again. The new fire house was proposed at the corner of East Holly Avenue and Commerce Avenue, the former site of Kandles Lumber Yard. Ground was broken soon after and on June 13th, 1981, the Company’s 80th Anniversary, the building was officially dedicated. While the building was being constructed, the fire apparatus were being stored in the Pitman Public Works Garage and in Highland Chemical Engine Company’s (28-3) fire house.

After many years of service, the 1956 Ladder Truck began showing its age and was replaced in 1991 with an American LaFrance 100 foot Aerial Truck. 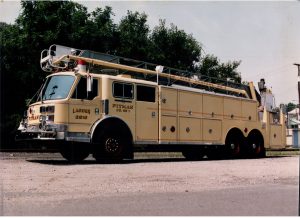 Shortly after in 1997, the Walk In Rescue Truck was also replaced with the 1997 Smeal/Spartan Rescue Pumper. It was also in the 1990’s that the Company began it’s own Ice Rescue Team and Confined Space Rescue Team.

In 2010, the Fire District went through the closing of Pitman Fire Patrol (28-2) due to staffing and training requirements. The membership of Fire Patrol merged with the other two (2) fire companies in town; Pitman Fire Company Number One (28-1) and Highland Chemical Engine Company (28-3). It was at this time that the membership sold the 1970’s era Hahn Fire Engine and replaced it with Pitman Fire Patrols Freightliner Fire Engine retiring the apparatus number 28-12, and adopting the new apparatus number 28-14. 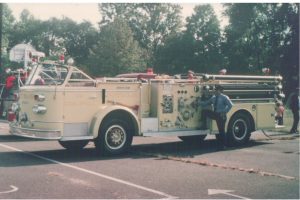 Soon after, in the late 2000’s, the 1991 American LaFrance Aerial Truck (28-16) began showing its age. A 2009 Pierce Arrow XT, 100 Foot Aerial Truck was purchased and placed into service in 2009. Shortly after this purchase, the Freightliner Fire Engine (28-14) was sold to a Fire Company down south who was in need of fire apparatus. In 2017 a Utility Vehicle was bought and assigned the Apparatus number 28-17.

Although Fire Company Number One has gone from axes and buckets to a company with an Engine, Ladder, Rescue, Utility, Marine, and Fire Police Apparatus; It still carries on the traditions started over 100 years ago and provide the highest level of service to its residents.

Good morning! Quieter weather is in store for today but overall the weather pattern remains quite active. The next system looks to bring rain changing to snow Wednesday night into Thursday but any snow accumulation looks to be fairly minor...most likely under an inch. A more significant storm could impact the area with snow Friday night into Saturday but at this point the system's track and impacts on the area remain uncertain. If it stays mostly out to sea, we'll see little to no snow while a track closer to the coast could result in significant snow.

Please follow us for updates and remember you can always get the latest forecast for your location at weather.gov/phi and find many more products here as well! Have a great day! ... See MoreSee Less

At 04:35 this morning 2811 was dispatched to cover Washington Twp Greentree Rd station. While enroute, 2811 was redirected into the scene as part as the second alarm. The Squad along with 2831 secured an additional water supply from Gantown Rd and Hurfville Crosskeys Rd. 2811’s crew were assigned to division C and assisted with overhaul of the trailers that were involved. 2811 was released after 2 hrs of service. ... See MoreSee Less